©2006-2021 Odonnell Entertainment® www.odonnellentertainment.com and
Adventures of Shadow® War Dog Memorial www.adventuresofshadow.com
Odonnell Entertainment® - A Video Production Company, web site design, hosting, travel, etc. and the official video production company for the St. George Reef Lighthouse Preservation Society. This site is being revamp and moving to different location. Please check back for more details about Odonnell Entertainment®. If you need any prices for the above services please feel free to E-mail or call today.

Look for the upcoming web site. That if you need video production, help out ideas on advertising, web hosting, plus our films have aired on History Channel and are being considered for Discovery Channel. We are also working on new documentaries with our other trademark. Our travel documentary is coming early summer 2012. Look for the whole new site coming this early 2012 that will show some of these great new ideas coming from Odonnell Entertainment®

Visit our other sites www.AdventuresofShadowgiftshop.com also www.adventuresofshadow.com we are also in the works on a whole new documentary on St George Reef Lighthouse. Our travel videos will cover other light houses, Route 66, tour guides for redwood country. We also have an advertising / travel book that is coming out. This guide will cover the whole gambit from training dogs, traveling with them, tour spots, how to video and do photography for the laymen. The book will also how you how to advertise and by pace ad agency in the future. Plus many new features on web hosting and displaying data for today's web.

Last One Out, Turn off the Light: Keeping the Watch
VHS Retail: $14.99 and DVD Retail: $14.99 * ISBN:0-9720152-0-5
On May 13, 1975, the last United States Coast Guard crew vacated St. George Reef Lighthouse, extinguishing its light after 83 years of service. Prior to the closing, a film was produced which portrayed the daily life of the lighthouse keepers, the final guardians of "Dragon Rock". Nearly a quarter of century later, in 1996, the St. George Reef Lighthouse Preservation Society (SGRLPS) began preserving the legacy by restoring this now darkened chapter in the maritime history on the Pacific Coast. "Last One Out, Turn Off the Light" is both rare and new footage, with updated graphics, showing the lighthouse in operation. This production provides a compelling look at both the past and present of St. George Reef Lighthouse. Due to the age of the original film, certain portions show some visual fading. Running Time: 31 minutes, Color and B/W, VHS, NTSC, Wide-Screen, N/R. Revised Copyright 1999/2016
Part of the sale of this video goes to help with restoring the lighthouse the way it was. DVD version is out which also includes Adventures of Shadow(R) Promo's with all three stars, Shadow, Scamp - now playing Shadow and Starrr.

You can purchase this product at the following location:
Odonnell Entertainment® and Adventures of Shadow(R) War Dog Memorial
PO BOX 771, BAYSIDE, CA 95524-0771
Phone: 707-442-4117 Web: www.odonnell.ws or www.AdventuresofShadowgiftshop.com
Also at more location, E-mail: billjr@odonnell.ws or call Odonnell Entertainment® or Adventures Shadow(R) Gift Shop at 707-442-4117 for details.
Note: All stores will be added that carry the "Last One Out, Turn Off the Light". 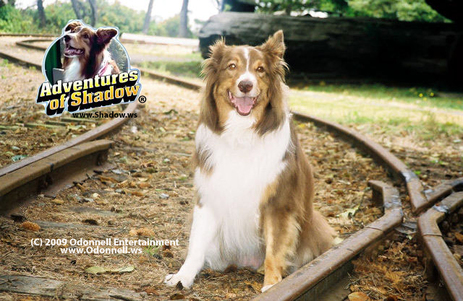